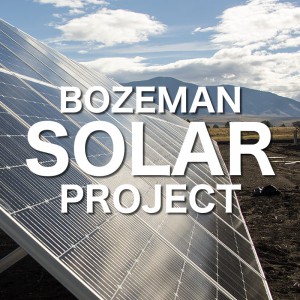 The Bozeman Solar Project is a utility-scale solar array located on Bozeman’s north side. It is a a collaborative test project between NorthWestern Energy, the city of Bozeman and Montana State University. It will generate 533,000 kilowatt-hours per year, enough to power around 54 homes.

The $1 million solar photovoltaic system is funded entirely by NorthWestern and was built by Bozeman company OnSite Energy. The Bozeman Solar Project is on 2.3 acres that is owned by the City of Bozeman near its water reclamation facility. The property is located just north of Interstate 90 near the 19th Street exit. It is visible from the Frontage road. The City of Bozeman has agreed to provide use of the land but has no additional financial responsibility tied to the project.

The Bozeman Solar Project is considered a pilot project for NorthWestern Energy. Montana State University will help with research tied to the five-year pilot project. It is designed to have energy output of about 533,000 kilowatt-hours per year, enough to power about 54 homes. The project will be tied to the power grid operated by NorthWestern Energy.

Currently, 56 percent of the electricity supplied by NorthWestern Energy comes from wind or water, supplied by hydroelectric dams and wind farms owned or contracted by the company.

“Solar energy is an area of renewable energy we haven’t done a lot of work in,” said NorthWestern Energy spokesman Butch Larcombe. “We don’t really know how much energy it is going to supply. We want to know how effective it would be.”

The project will also help the City of Bozeman achieve its Climate Action Plan goals and guide future renewable energy projects. “This partnership presents an opportunity to learn and innovate together to help advance long-term energy solutions,” said Natalie Meyer, sustainability program manager for the City of Bozeman.

All MLS Information ©Southwest Montana Multiple Listing Service, Inc. All rights reserved. MLS information is provided exclusively for consumers' personal, non-commercial use and may not be used for any purpose other than to identify prospective properties consumers may be interested in purchasing. Information is deemed reliable but is not guaranteed accurate by the MLS or Explore Bozeman. Explore Bozeman™, Delger Real Estate™ Bozeman Real Estate Company™ and Bozeman Lifestyle™ are trademarks of BritWire, Inc.